We’ve been celebrating a milestone birthday here at Duffy Financial Advisors  – the 50th anniversary of my dad Michael’s decision to go out on his own in business.

It was a different world then with no computers, no fax machines, no mobile phones, no internet, no iPads, no texting  and no email.

Everything was pen and paper or typewritten if you had one of those new-fangled gadgets at the time.
It was a brave decision by Dad who, it must be recorded,  never had the slightest doubt but that his fledgling business would succeed.

He’s the eternal optimist and sometimes you  need to be – not just in this business but in every walk of life.
Just think for a moment all the fiscal crashes that occurred since Dad made the monumental decision to go out on his own in 1965

Well Dad survived all those and now 50 years later we are delighted to have many loyal clients who we are happy to have been steered through those financial choppy waters to richer moorings.

To celebrate this high watermark in our business life, we had a night out recently … and you can see Dad and myself here pictured cutting the ’50 years in business’ cake! 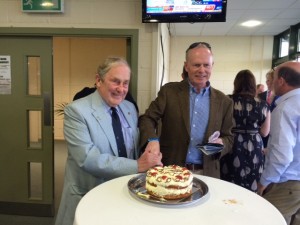 it is also worth having a look at the original advertisement that Dad put into the Westmeath Examiner on 27/03/1965 announcing he was sailing solo into life’s financial ocean. 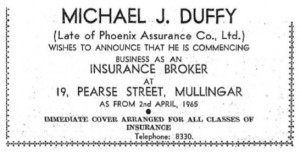 THE POWER OF LONG TERM INVESTING

It is interesting to note that In August last year {2014} one of those original clients “Standard Life investment policy” came up for review.

This was no ordinary review as this policy was taken out on Feb 1, 1969 and was still on our books some 45 years later.

Wow isn’t that something else?

Albert Einstein described it as one of the greatest miracles known to man when referring  to the incredible potential of an investment to grow as interest is continually earned upon interest over a long period of time.

An equal powerful principle in investing is that of “ euro cost averaging”. This is an investment strategy which involves regular saving into a particular investment at regular intervals over a period of time. This period could be over several months or years.

Such a strategy can help to reduce risk during times of market volatility and can avoid the pitfalls of attempting to time entry into investment markets.

No time like the present to start creating a secure financial future….. and right now is a very good time because of the returns that are on offer.

“Cats in the Cradle”..Are you achieving work/life balance?

BOB’s are hot…..but what are they?

Investing for the future is about TIME not timing.

TEARS IN MY EYES

What we do as Financial Advisors

Do you know your magic number?

Self-Directed Pensions – The Opportunity for You

Wealth Management- What is it?

Start the new year by protecting your family’s financial future

Financial Music – Time for you to tune in

Why Good Advice Can Give Sad Stories Happy Endings

“Cats in the Cradle”..Are you achieving work/life balance?

The Secret Millionaire…It could be you!!!